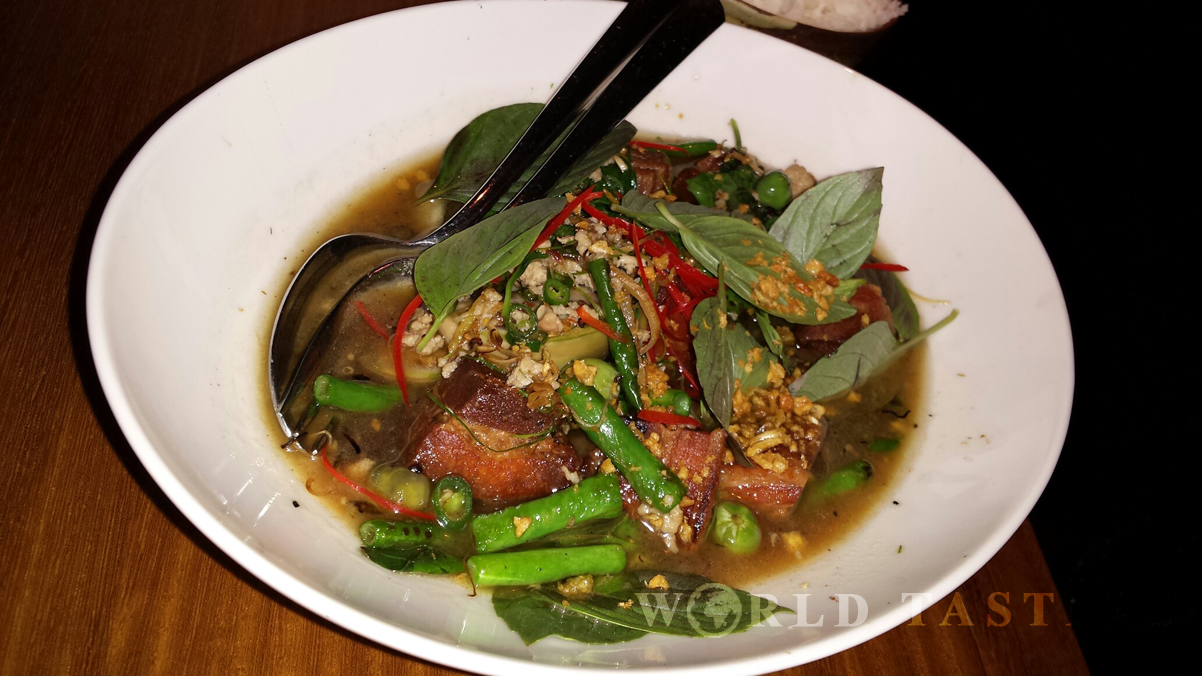 Farang is one of those restaurants that you discover. (Or, if you are like me, you have a husband to discover it for you!) Truth is, you will rarely hear its name in an everyday conversation, and you will definitely not see it featured on an ad page of a magazine. In fact if you are not careful enough you may as well pass by it without noticing. The unpretentious and simplistic entrance however reveals a small fairy tale experience in the middle of the hectic city.

Once in, the city noise was quickly replaced by remote and indistinguishable chatter. No background music. No intrusive lights. As we were escorted to our table, we realized that the restaurant was more packed that we thought at first. Private tête-à-tête and small groups were enjoying tasteful dishes I was eager to try out.

Farang offers two serving options: either predefined tasting menus or à la carte choices. We went for the latter. The starters (or snacks, as they called them) featured the traditional cha plu leaves, typically used in Thai cusine as wrapper of the snack. Yes, you eat them! And yes, they have a rich taste, which was complementing perfectly my salmon choice. (The husband maybe didn’t have the time to recognize it, since his snack disappeared faster than you could say ‘cha plu’, but this is just to show how much he actually liked it.) The main courses were ‘to share’ but we both took an individual approach in devouring the deliciousness – the husband with a woked pork belly, and I with cod. Or so it seemed at first. However, I had to sacrifice myself and taste both dishes. Just in the name of the blog, that is. And not that I want to brag, but somehow I made the better choice. The woked pork was one idea too heavy and way too spicy for my taste. The cod, on the other hand, only had a slight touch of spiciness to it, just enough to tickle the senses and make one crave more. Whether you are planning a romantic dinner, a business meeting or just to treat yourself to a good meal with a group of friends, Farang is the place to be. Bon appetit!