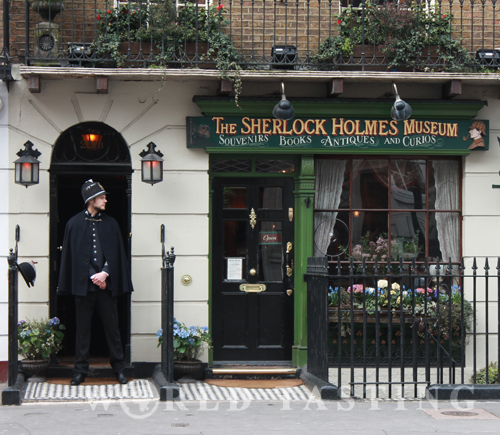 On Sherlock Holmes and Doctor Watson

By Sylvia on April 25, 2013 0 Comments
The Sherlock Holmes Museum @ London If you have ever wondered what is the most famous address in the world, I have the answer for you. 221b Baker Street, London.

The place where Sherlock Holmes and Doctor Watson were solving involved murder cases has always been fascinating me, so going to the Sherlock Holmes Museum in London gave me that excitement a child feels before getting an ice-cream. The museum opened to the public in 1990, although the building itself was built in 1815. Till now the museum has hosted thousands of people from all over the world, curious to visit the home of the famous detective. I bet the amount of visitors has increased significantly after the release of the two movies in 2009 and 2011. And although sir Arthur Conan Doyle did very well in describing the environment of Holmes’s home on paper, the museum representation didn’t quite live to my expectations. I do understand the desire of the curators to keep it realistic, but being dusty and overwhelmed with all types of furniture did not really leave me with the impression of going back in time. Interior of the Sherlock Holmes Museum in London, a bit cluttered in my opinion

However, what did make an impression were the wax figures recreating scenes from different murder cases, and the numerous amount of letters written by fans to Sherlock Holmes. A recreation of Charles Augustus Milverton and his surprise assailant

The Hound of the Baskervilles @ The Sherlock Holmes Museum, London