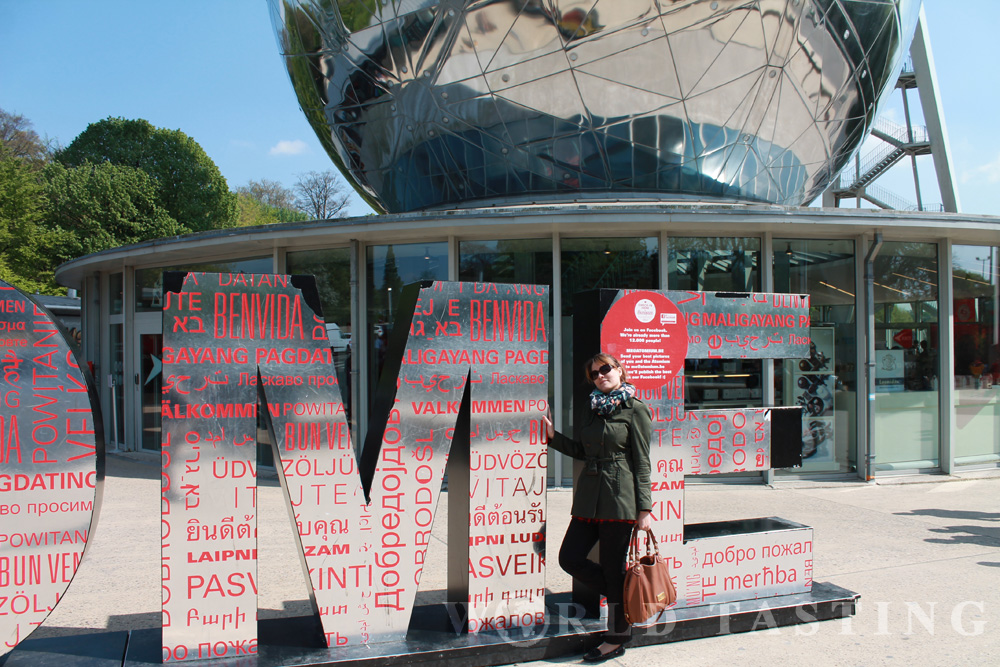 When I said we were planning a trip to Brussels over the Easter holidays, I encountered some (healthy) skepticism. The most popular question by far was, ‘What is there to be seen/done in Brussels?’. The short answer is, plenty. And no, Manneken Pis does not count as plenty. (But more on this, later.)

Well, in actuality this was Day 2. But since we did arrive late in the afternoon, and we just had time for a quick tour around downtown before we ended up in some random restaurant, I guess day 2 can count as the official day 1.

The sun was shining bright and the forecast was promising a beautiful weather for the day to come. After a quick breakfast at the hotel (we stayed at the Marivaux, a spacious choice in a not so culturally friendly part of the city but just a 5 min walk away from the main square), we pinned the destination on our digital maps – the Atomium (followed tightly by Mini Europe). The easiest way to reach these attractions is by subway from Gare de Bruxelles – Midi. The ride takes no more than 15 minutes and if you pay close attention to the design of the stations it actually becomes an extremely enjoyable ride. (Unfortunately, no pictures to back up this statement, so if you have doubts you will have to go and check it for yourselves.)

The Atomium has a special kind of magic to it: it humbles and elevates at the same time. Only once did I feel like this before, when I first stood in front of the Eiffel tower. (I guess engineer André Waterkeyn should consider accomplished his mission of creating a construction as impressive and breath-taking as the Eiffel tower.) But after the amazing first impressions, reality strikes. As usual, in the form of a queue. A 40 minute queue. Good news is that you only need to queue once in order to buy a combined ticket for Atomium and Mini Europe at a reduced price. (Which saved us some extra 20 minutes of waiting later during the day.) And if you are lucky (and mostly patient), you may also get a cheesy photo in front of the enormous WELCOME sign in front of the main entrance. (Or just an enormous ME sign, in my case. A coincidence?) The Atomium tour constitutes of two parts: a walk through three of the spheres, and an elevation to the highest sphere for a beautiful view of the city of Brussels. The walk through the spheres is extremely entertaining. The first sphere reveals the whole process of designing the construction (from the initial sketches until the more polished version after the joining of the Polak brothers to the project). You then move to the second sphere which showcases parts of the actual Expo’58 (the reason why Atomium was built in first place). Moving between spheres happens with the help of escalators (which for 1958 turn out to be the longest escalators in Europe, with length of entire 30 meters). The third exhibition is all about interior design, from the perspective of architects. The second part of the tour begins with an almost 1 hour of waiting to get to the only lift that brings people to the highest sphere. According to the people working there this is not the usual waiting time. However you should anyways be prepared for some queuing, because of the speed of the fastest lift (as of 1958 that is!) – the never-heard-of-before 5 m/s. (At an elevation of 100 m, you do the maths.) It is actually amazing (and it feels extremely authentic) that they have not replaced the lift with a newer (and faster) version, although we were told that there is at least bi-annual reparatory work going on to assure visitors’ security.

It is all worth the waiting at the end of the day. The views from up are gorgeous. (Psst, there is also a restaurant up there, but be sure to book in advance.) We quickly spotted our next stop, Mini Europe. If by now you are starving (as were we) skip the cafeteria next to the Atomium. It is an OK place, but just some meters away awaits you the Village – a bunch of establishments serving all sorts of traditional food and drinks. (Anyone in for a waffle under the warm April sun?) Finally, we entered Mini Europe. Since we already had our tickets pre-purchased, we skipped some good 20 minutes of waiting. We were handed brochures (maybe the most informative brochures I have seen in a while) and we started our journey through Europe’s main attractions. I found it extremely interesting. Usually when you see a monument or a building it is almost impossible to notice all the small details, but the designers and engineers have done a wonderful job here both in recreating the structure and also in capturing the spirit of the place. Next to each installment there were ‘anthem’ buttons, as I like to call them. (Basically a huge button that one can press to listen to the anthem of a given country.) Those turned out to be extremely popular among kids and did add something extra to the whole experience as we ended up walking through a tunnel of anthems as we were ‘travelling’ from one country to another.

Below are just some of the many models. My personal favorite? By far the interactive representation of the Berlin wall (that bagger was actually destroying parts of the wall!), and the Rila Monastery (I may have clicked that anthem button, I hope you don’t mind a moment of pride.)