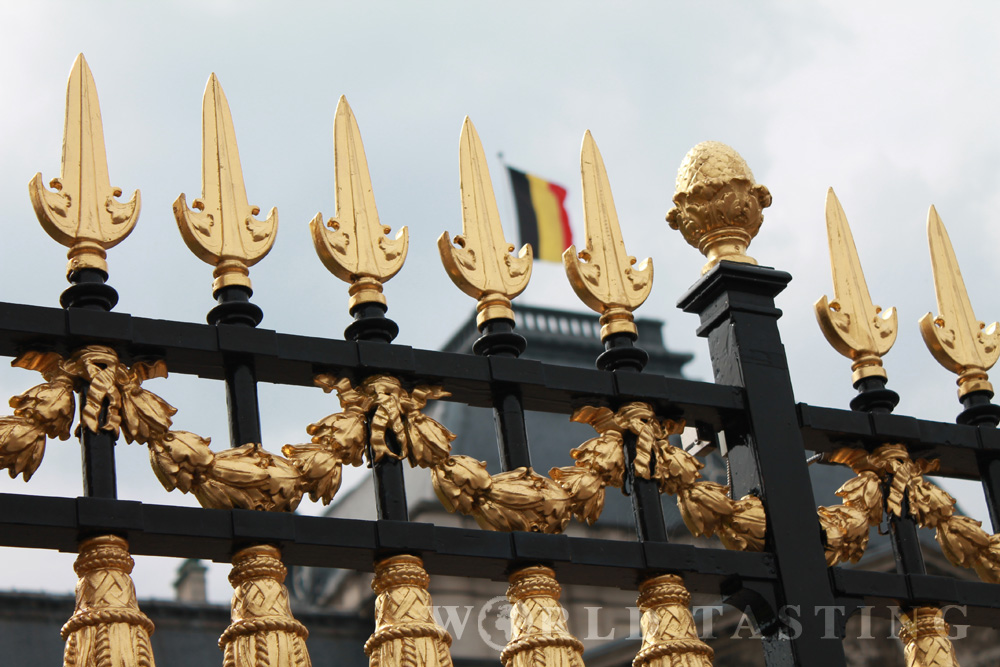 By Sylvia on May 4, 2014 0 Comments
Royal Palace of Brussels The day started with a stroll along the wide Anspach boulevard all the way down to Gare de Bruxelles-Chapelle to discover the majestic building of Notre-Dame de la Chapelle church. On an Easter Sunday morning walking through a non-touristic street in the center of Brussels reveals a fairly different face of the city. Calm and quiet. The few people on the streets are either late for church or early for the pub (but patiently waiting on a nearby bench, beer in hand). On both sides of the street beautiful old-fashioned buildings are fighting for my attention side by side with structures with half ruined facades and forgotten past. You can’t blame me for choosing to store in the digital memory pile the only monument that looked pretty – a gorgeous fountain at the roundabout of Rue du Midi. Notre-Dame de la Chapelle is indeed gorgeous, however I was more fascinated by the street mosaics one could find all over the place. Googling didn’t reveal any results as to why there are so many street mosaics in this part of the city. Any ideas? We continued along the tiny Rue des Minimes towards the court. And all of a sudden, a whole different Brussels appeared in front of my eyes. Small streets hosting numerous antique boutiques, galleries and museums. A cute church cuddling in a corner, and an outdoor coffee place right in front of it. (Later it turned out that the cute church was Église Saints-Jean-et-Étienne-aux-Minimes.) And just a few meters down, and an elevator up, we sank again in the tourist crowds. This is how we knew we were at the courts of justice. (Well, the magnificent ancient building and the map in my hand may have revealed it too.) Somehow wherever there are tourists, there are also waffle vans. Their bright almost neon colors become even more vibrant against the dull concrete of the monuments. We skipped the opportunity to grab a waffle on the go, and continued towards the next destination – the palace – on Blvd de Waterloo. (If you are into shopping, Boulevard de Waterloo may just turn out to be your Brussels paradise: basically every possible brand you can think of is on offer here.) We only saw the Palace from outside (since it is open to public only during the summer months) but after seeing one too many palaces I wouldn’t expect this one to deliver on anything different. In case you are curious as to what is inside, here is something that may be of interest. Parc Royal (or the Royal Gardens) is just across the Palace. But don’t be fooled by the name – royal is the last adjective to attribute to this particular park. However it did have some gorgeously ornamented gates at the entrance so I guess that counts. Just some 10 minutes walk away from the Palace are situated the buildings of the European Parliament. And even if you are not a history fan, a visit to the Parlamentarium is a must. With a digital guide in a language of your choice (as you can suppose, all languages represented in the European Parliament are available) you need some good two hours to travel back in time from 1944 till nowadays. The exhibition is entirely interactive which makes is appropriate both for kids and grown-ups. (Sometimes the exhibition is so interactive that you may unintentionally interrupt someone’s activities without even realizing. If nothing else, it makes for a good way to start a conversation. Just sayin’.) I guess we saved the most touristic parts of the city, i.e. the old town, for last. But before that there was one last place we had to visit – the Cathedral. And if you get the feeling that you have seen it before, you are partially right. Think of Notre-Dame de Paris. Then add the fact that the two round towers were added during the second marriage of King Henry I to French princess Marie. You get the gist. But no matter the history, nowadays the Cathedral has its own vibe that makes it unique. (And the location on top of the Treurenberg Hill just adds to the experience.) From there on, it was a no brainer. A quick stop at St Hubert Galleries followed by a sunset at Grand Place gives the precise amount of touristic feel one needs for a day. And of course, not to forget Manneken Pis. I am always truly amazed as to why certain monuments become landmarks. Manneken Pis doesn’t make an exception. I actually refused to take any pictures (partly because of the crazy crowds of people in front of it, trying to fake a – most probably future profile – picture of holding the peeing boy by … well … whatever could be held, I guess), but the husband went all paparazzi on it, and then I felt I had to use it as illustration. And in case you didn’t have enough of it at first glance, a walk through Rue de l’Etuve would provide you with all possible recreations of the boy. (Psst, a few blocks up there is a statue of a peeing girl, in case you are concerned with gender equality issues; search for Jeanneke-Pis on your maps.) Manneken Pis in any size, from any material We finished off the day on the highest possible note – with a good portion of mussels. Chez Leon is always my preferred choice, and I couldn’t leave the city without spoiling myself. Bon appetit!