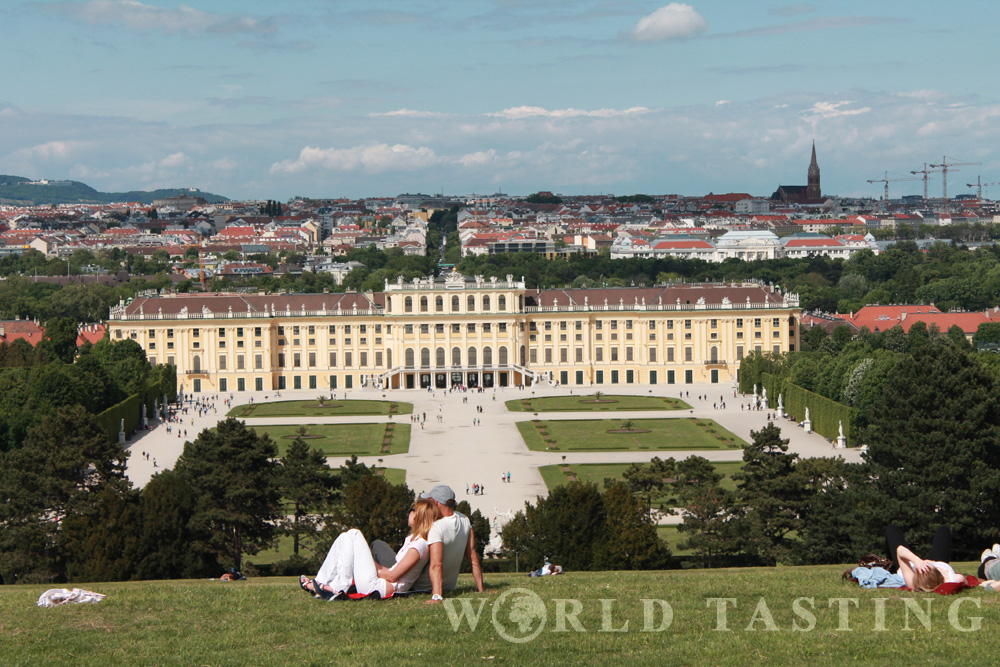 The day started with a ride on U4 from Vienna’s Karlsplatz which by now has become our favorite subway station. Direction ‘Hutteldorf’. The forecast promised sunshine. The clouds seemed to have other plans. Armed with weather optimism and umbrellas, we got off at ‘Schönbrunn’ in a search for our royal roots. Finding the entrance to the palace was a no-brainer: a camera-equipped crowd escorted us there, while a number of tour buses to our right overlooked that we didn’t deviate from our way. (First challenge towards becoming part of the court: accomplished.)

We headed directly towards the ticket office. Some vending machines were waiting free in the corner, while a huge queue had formed in front of the cashier. We hurried to the nearest machine, and after some minutes of collaborative clicking efforts onto a touch screen (possibly a problem future princesses were experiencing on a day-to-day basis), I proudly held a 40-room Schönbrunn tour ticket to queenliness.

We had an hour until our assigned time to enter the palace tour, so we decided to take a walk through the gardens. It is that very first view of the royal gardens that took my breath away. (Dear Maria Theresa, I may have momentarily pictured myself in a gown, white lace parasol in hand.) As far as the eye could see there are evenly mowed grass, and precisely trimmed trees. In between them are hidden numerous monuments. A total of 80 workers maintain the gardens, and those could as well have been magicians rather than gardeners.

At the foot of the hill awaits the Neptune fountain, a massive monument commissioned by Maria Theresa as part of the initial garden design in 1770s. Behind it a small opening reveals a view to the back side of Schönbrunn’s palace through a thick water curtain. Above it begins the path leading towards the Gloriette. However we had to return back, since our time for the palace tour was approaching. The 40-room tour took us around an hour to complete. (There is also a 20-something-room tour option for those who are less patient walking through tiny corridors with dimmed lights.) Among the highlights of the tour are by far the Mirrors Room where the young Mozart performed in front of Maria Theresa in 1762, as well as the Rich Bedroom which accommodates the ceremonial bed passed by Franz Joseph’s parents onto him and Maria Theresa. Currently the bed as well as all the tapestry (heavily embroidered in gold) are behind a thick glass, and are preserved in special thermal and light conditions. (Dear Maria Theresa, you and I definitely do not share the same taste in style when it comes to interior design.) Exhausted by the royal tour, we awarded ourselves with a nice regal lunch at the Residenz Schönbrunn restaurant. One extremely tasty goulash later (Dear Maria Theresa, did the Empress also eat goulash?) we were ready to continue our royal journey, when we spotted what turned out to be our best friend for the rest of the day: the Schönbrunner Panorama Bahn; a hop-on hop-off service that slowly drives through all the landmarks in the royal gardens. Our first stop was Hietzinger Tor, and the Palm House. The latter was closed due to maintenance issues. At the furthest end of the Palm House is the main entrance of the Vienna Zoo, or Tiergarten Schönbrunn. (Dear Maria Theresa, you and I seem to be both animal lovers.) We skipped the opportunity to see the giant pandas, and hopped on the next Schönbrunner to get to the most exciting part of the tour: the Gloriette. To say that the view from the Gloriette is fantastic would be an understatement. No wonder why Maria Theresa was so keen on having her breakfast on the top, overlooking her kingdom. (Dear Maria Theresa, you and I seem to share a common appreciation of beautiful scenery.) Built in 1775 as a monument to Just War (a doctrine to ensure moral justification of war), the Gloriette now hosts a coffee shop overlooking the calm lake, and has become a favorite place both for tourists and locals to enjoy views of the city of Vienna. We hopped once more on the Schönbrunner, this time to get to our last stop: the Obelisk fountain. The fountain is engraved with symbols telling the story of the royal family. (Dear Maria Theresa, you and I both have a story. A different kind of story.) The driver made a minute stop; just enough time to snap some shots while comfortably seated. Schönbrunn was by far one of the best experiences we had in Vienna. So long, and thanks for all the hospitality.