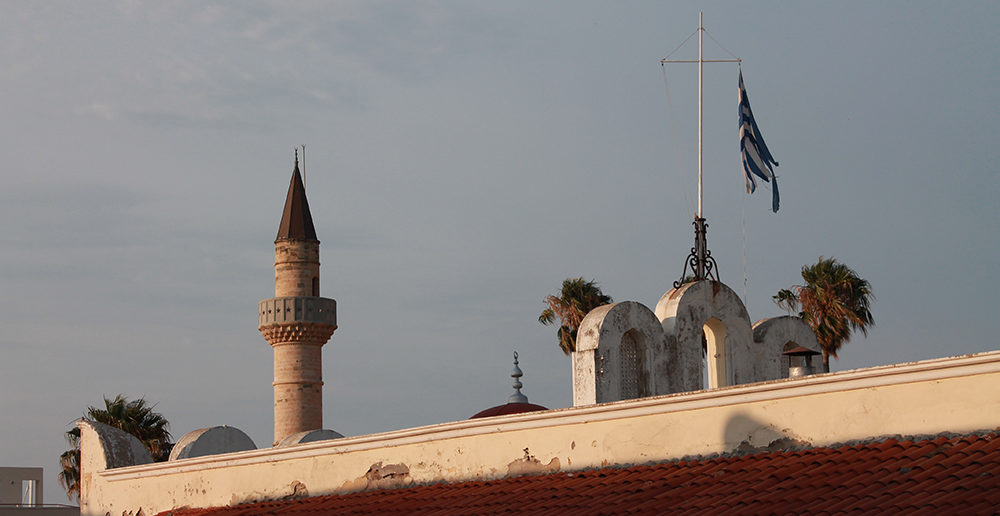 Many believe that Kos town is the hometown of Hippocrates, the father of modern medicine, and a whole souvenir industry lives around this fact. Thus, the plane tree under which Hippocrates was presumably educating his students on the art of medicine has become one of the main tourist attraction on the island. Now, let’s get it straight: the tree that is currently residing on Platía Platanou (or “Square of the Platane”) is only 500 years old, so definitely not the original (for a reference, the supposedly original tree should now have been approximately 2400 years old), but even so it is still a majestic tree with a long history that some may find interesting. However, I found this column (also very touristic and with no real historic value either) a bit more fascinating. So, what is there more to Kos town than the Hippocrates tree? What I found very interesting is the mix of old and new architecture all over the place, just as well as the mix of cultures and religions. The island has been under the Ottoman empire occupation, then has belonged for short time periods to Germans and Brits until it again becomes Greek in 1947. So there are plenty of influences in the design. For instance, the area around the main square is home to both the mosque Moslem Shrine Ntefterntar and the Orthodox church of Agia Paraskevi. The square also hosts the Medieval Phoros Gate. Pass through it and you will be swallowed by lights and smells of the ‘Bar street’. No big surprise here, the name says it all. The place is perfect if you are in your early 20-ties and searching for some cheap alcohol options. For those that would like to have a more relaxed and sophisticated experience, take a stroll by the water-front. There are plenty a bars and coffee shops to accommodate every taste. Our favorite place was Neo Syntrivani (Akti Kountourioti 5) – a lovely coffee/bar with kind personnel and great cocktails. Back in the day, the center of Kos town was occupied by a huge market, Agora in Greek. Now the Ancient Agora is closed for visits, and you can only see the ruins while walking across the town, but a new smaller and much more modern agora has appeared on the main square. There you can find anything from local wines and spices to olive-oil cosmetics to souvenirs. I found this to be a wonderful place to stock up on some spices, honey and wines to pack in the check-in luggage. Moving away from the main square and walking towards the port, you can find the boats that can take you to Bodrum, Turkey for a day trip. There are many on offer, some smaller, some fancier, so the choice is yours. We didn’t have the time to make the trip, so I can’t comment on the service, but I have to mention that some boats were just too cute to pass on.

Further down the port is the Neratzia Castle, which was unfortunately closed both times we went to Kos town, so we only managed to have a look on the fortress from the outside. The Castle was built by the Knights of St-John of Jerusalem who ruled on the island from 1314 to 1512. Finally, as you walk towards the bus station, you will see the beautiful building of the Town Hall on one side, and the coastline of Turkey on the other. It is a great little location to be.