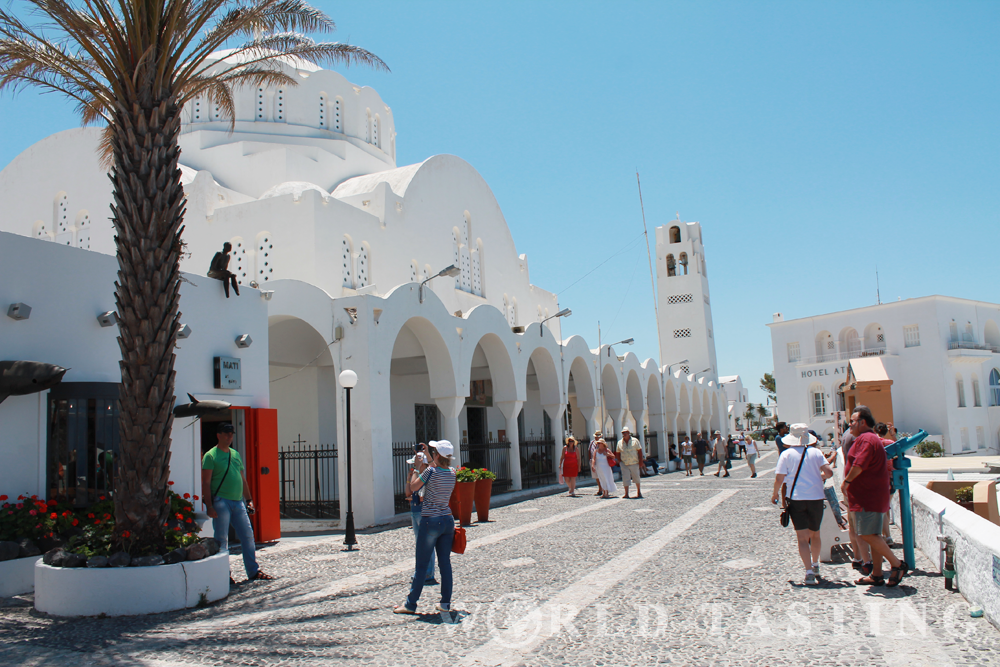 Fira, the heart of Santorini

By Sylvia on June 22, 2013 4 Comments
The Orthodox Metropolitan Cathedral in Fira, Santorini

A view over Fira, the main town in Santorini

The best way to reach the island of Santorini is by plane. (I am aware of boat options from Athens as well, however those take ages, and if you don’t have vacation days to spare in travel, then you would most probably frown over a 4-5 hour boat trip.) Our pilot was nice enough to make a tour around the island and the volcano before landing. He claimed this was a special treat for our plane to compensate for the short delay before take-off. But deep down inside I am sure it is a trick they do to all tourists. Whatever the reasons, it turned out that we were seated on the ‘wrong’ side of the plane, because only those on the left could see the island. While people were exclaiming oh’s and ah’s, we were patiently waiting for landing. So, take it from me, next time you book your seats to Santorini, choose places to the left of the aisle.

The airport raised laughter among all travelers. A small white building was welcoming us to Santorini. However, all those laughing at landing were probably cursing the place on leaving. Not only because vacation was over, but also because this small building actually had prices comparable to international hub airports.

Most decent and all high-end hotels offer a pickup from the airport. If you have this opportunity, definitely take advantage of it. Taxis ask crazy amounts of money for a less then 10 minutes drive (if you are staying in Fira, the ‘capital’ of the island). We were staying at the Dream Island Hotel, a cute family hotel composed of ten small villas, so the owner Roussetos came to pick us up from the airport and did us a small guided tour while driving through the island.

The town of Fira (Φηρά) is the main town on the island of Santorini. (The island hosts a dozen villages with a total population of 15.000 people.) We first walked around the town just a bit after sunset, and I was quickly fascinated by the small streets, the cute but pricey jewelry shops and the numerous souvenirs in white and blue. One place to definitely visit is the Babalu jewerly shop at Gold street in Fira, where they sell pieces by the talented Anna Andreadi. Small streets and jewelry shops are typical for Fira

Below the town of Fira is located the Old Port. You can get all the way down via the cable car (“teleferik”) or by foot, and on your way up you can use one of the cutest transportation means on the island, the donkeys. I was about to get close to my rural self and jump on one of them, but when I saw them struggling on the cobbelstones I just couldn’t make myself do it. So I only ventured a shot of the cutest donkey ever, and then bought myself some souvenirs featuring donkeys as a compensation. At the end of the main street is located the biggest church on the island, the Orthodox Metropolitan Cathedral. (Actually the island hosts some 250 churches altogether.) Just opposite the cathedral a marvelous view of the volcanic island is revealed. Every day cruisers anchor in the bay, and small boats sail back and forth from the cruiser to the island to transfer passengers to the land. There is a very simple and easy way to differentiate tourists on the mainland (apart from the fact that they always walk in groups and there is someone waving an umbrella in front of them). They all wear hats. And believe me, a hat is a must if you want to survive the burning Greek sun. For me I chose a cute white one with a white bow, just to be in trend with the color scheme of the island. A view from the caldera in Fira, Santorini

After a long day of exploring Fira, there is nothing better than enjoying the sunset. Couples gather along the caldera to share the moment. I have to admit, watching the sunset was my favorite part of the day. Not only because of the beauty of the moment, but also because you can see so much love and affection gathered in one place. I couldn’t help myself and snapped some shots of strangers. Love is in the air at sunset in Fira The town of Fira right after sunset